Each year, we select two fabulous kids to be ambassadors to represent all the kids of WA. In 2019, we introduced you to Callum Berrisford & Eva Molloy.

Callum was diagnosed with Stage 4 Neuroblastoma, an aggressive childhood cancer at the age of 7 months. Around 6 months old, Callum’s behaviour started to change, he was always crying and wanting to be held, and was no longer laughing or happy. He lost the ability to sit up on his own despite the fact he was originally sitting up at 5 months unassisted.
On May 6, 2008 Callum was diagnosed with Neuroblastoma Stage 4. The scans of his body showed he was riddled with tumours. His parents we were told he would be lucky to live the week.
Tests were conducted to see whether Callum’s body could handle treatment. Amazingly, his little body was deemed strong enough and 3 days later Callum started chemotherapy.

Callum’s treatment continued over the next couple of years and included many more rounds of chemotherapy, biopsies, lumbar punctures, stem cell treatment, radiation, countless x-rays, scans ultrasounds and blood tests, a nasal gastric tubes, a broviac catheter, as well as a 6 week mega therapy treatment, and a major surgery to ‘de-bulk’ the large mass of tumour in his stomach which left him with a giant scar across his abdomen.

He has now been in remission for 9 years, which the family celebrates every year on the 24th July. Callum now has scans every 3-6 months to monitor his health and takes every medical appointment in his stride.

Despite his challenges, Callum is a normal everyday kid who loves playing Xbox, riding his bike with his friends, and trying new and different things. He recently picked up his first ‘paid’ job by posting a letter to the neighbour with an offer to walk their dog. Instead he was given the task of feeding their fish!
Callum is an avid dancer – he takes tap and ballet and is in his school dance club. He also loves the story of the Titanic and can randomly quote facts he’s learned through reading and researching it. His favourite foods are chicken kiev and hot chocolate.
Callum loves the idea of being a fashion designer when he gets older. Callum has already started designing, with rough sketches of clothes, and drawings of his first store which he keeps in a file. He has a business name ready to go for when the time is right.
Callum is very family orientated – he loves hanging with his mum, his siblings, and his Grandparents. He loves taking his dog to the beach with this Dad, when he’s visiting his Dad every Friday night.

Eva was born in Feb 2011 with Spina Bifida that affects her mobility. Eva is unable to walk, has a controlled seizure disorder, and has had three shunt revisions. Recently Eva’s condition became a little more complex when she had a serious seizure in November which was unexpected.

Although Eva has more bad days then good but never lets it hold her back. She is bubbly and her parents support Eva to show her there are no boundaries, only just different ways of thinking and doing things.
Eva is a trend setter in wheelchairs and a motivator amongst wheelchair users. Eva has always had a game changing wheel-chair style and design. Eva put purple wheelchairs on the page with her first chair and also invented a wheel design that has inspired adult users to also have cool wheels. Eva revels in performing wheelchair tricks. She particularly loves cheekily pranking unsuspecting victims with her skills, to give them a fright!

Eva love to ride and spend time with horses and participates in a special swim team in Fremantle. Eva dances with the Dance Collective, has very good upper body strength so loves to hit the spider frames and climb in the park.

The beach is one of Eva’s favourite places – she loves to collect shells, look for crabs, and float in the ocean. And while Eva loves the outdoors – the girl also loves to shop.
Eva’s favourite foods are fruit and pasta. Instead of ordering chips or wedges in a restaurant, Eva once ordered a mandarin – which was not on the menu. She got her mandarin though.

Eva’s favourite TV Show is Home and Away! 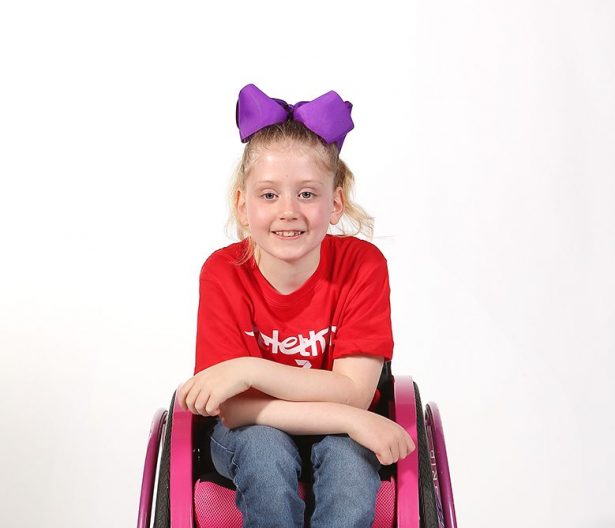