Over the past 47 years the people of Western Australia have donated over $200 million to Telethon – THANK YOU WA!

There were plenty of major donations from the big end of town, but as always it was the generosity of the people of Western Australia that shone through raising a record breaking total of $25,854,524 over the weekend.

See how 7 News covered the event after the weekend.

The amazing 26 hours live-on-air weekend saw more than 300 TV production crew at work; more than 200 lights; 60 plus microphones; 55 hair and make-up artists; more than 600 entertainers; 100 Virgin Australia flights and more than 1,000 volunteers which made the Telethon weekend the most successful ever. Staff of Channel Seven Perth and The West Australian led an army of volunteers to deliver another hugely successful weekend.

To start the weekend, Prime Minister Malcom Turnbull committed a Federal Government donation of $1.5 million, which was presented by Deputy Prime Minister Julie Bishop. Over 800 stylish guests at The Lexus Ball excelled in their generosity raising an unprecedented $1 million.

Premier Colin Barnett handed over a cheque for $500,000 from the State Government on behalf of all West Australians. For the second year BHP Biliton donated $4 million dollars as part of their $20 million five year deal, with the donation being directed towards The Telethon Kids Institute. Andrew and Nicola Forrest’s Minderoo Foundation donated $1 million, by matching all of the donations phoned through to the Sunday Times Call Centre in the first four hours of Telethon on Saturday night. Perth businessman, Tim Roberts, another Million Dollar Partner, generously donated $1.5 million this year. Malcolm, Tonya and Carolyn McCusker generously donated $1.1 million from the McCusker Charitable Foundation. Milllion Dollar Partner, Ramsay Health Care donated $1 million and Wesfarmers donated $1.25 million as part of their $5 million, four year deal.

Here’s how The West Australian covered the weekend on Monday October 19, 2015 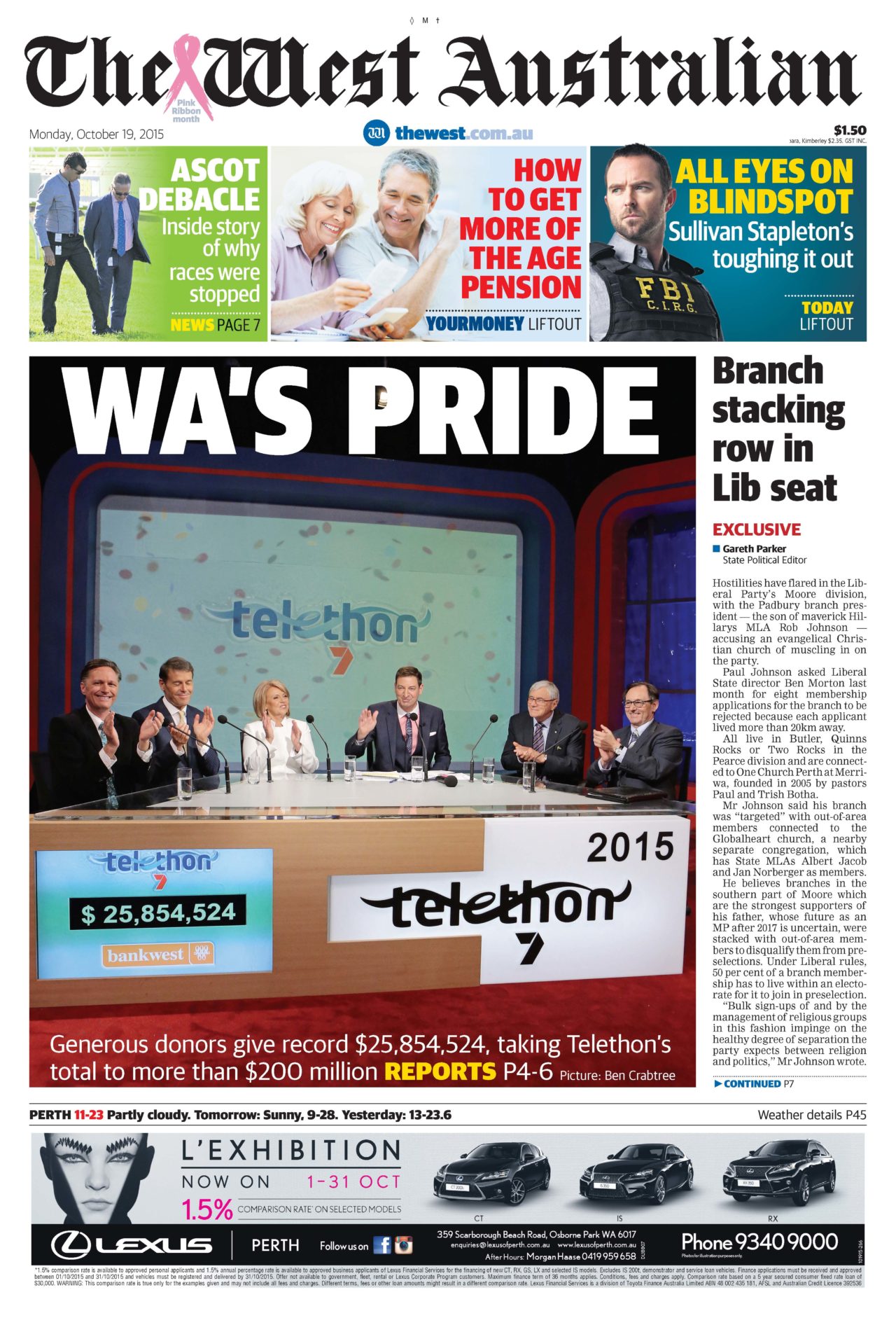 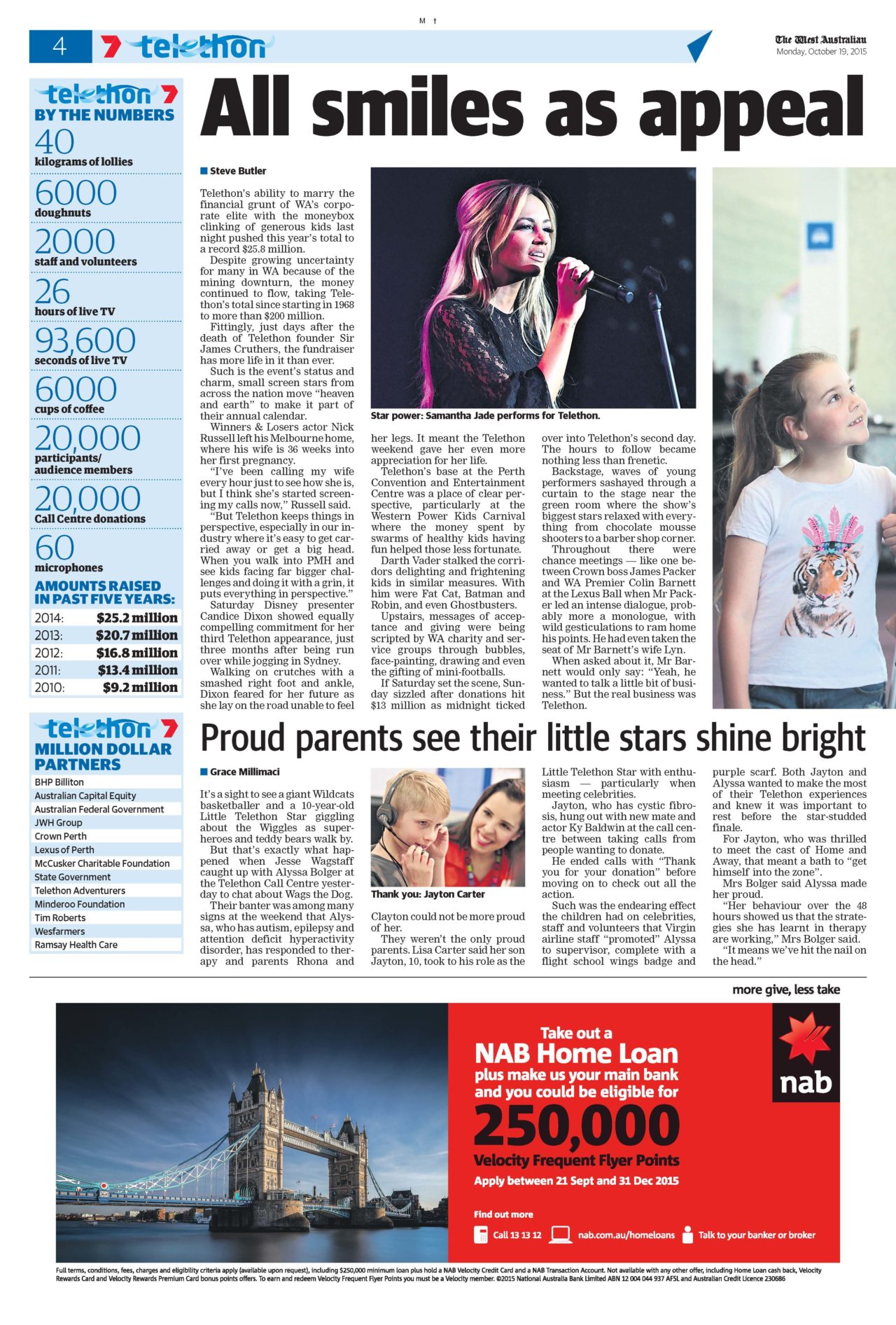 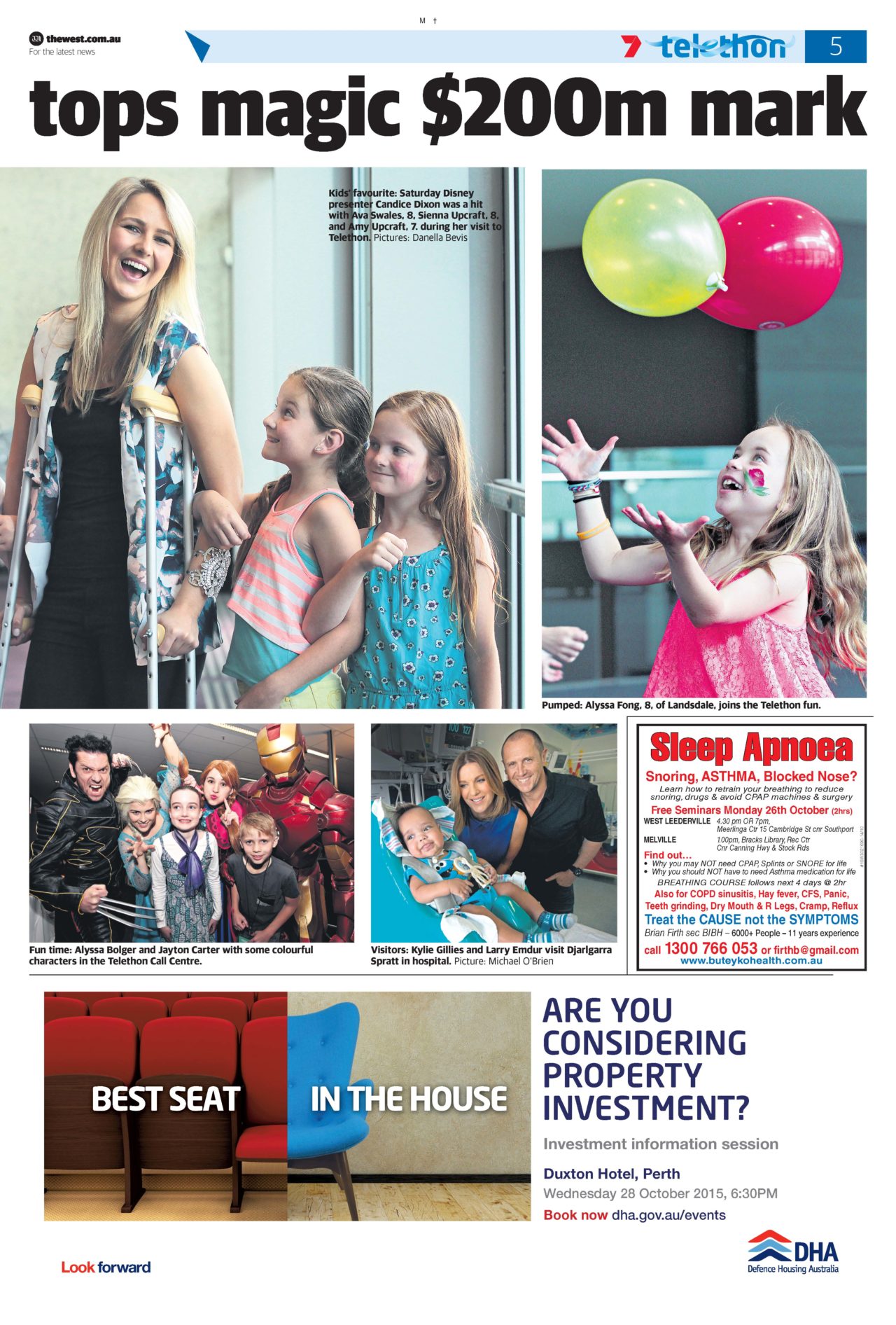 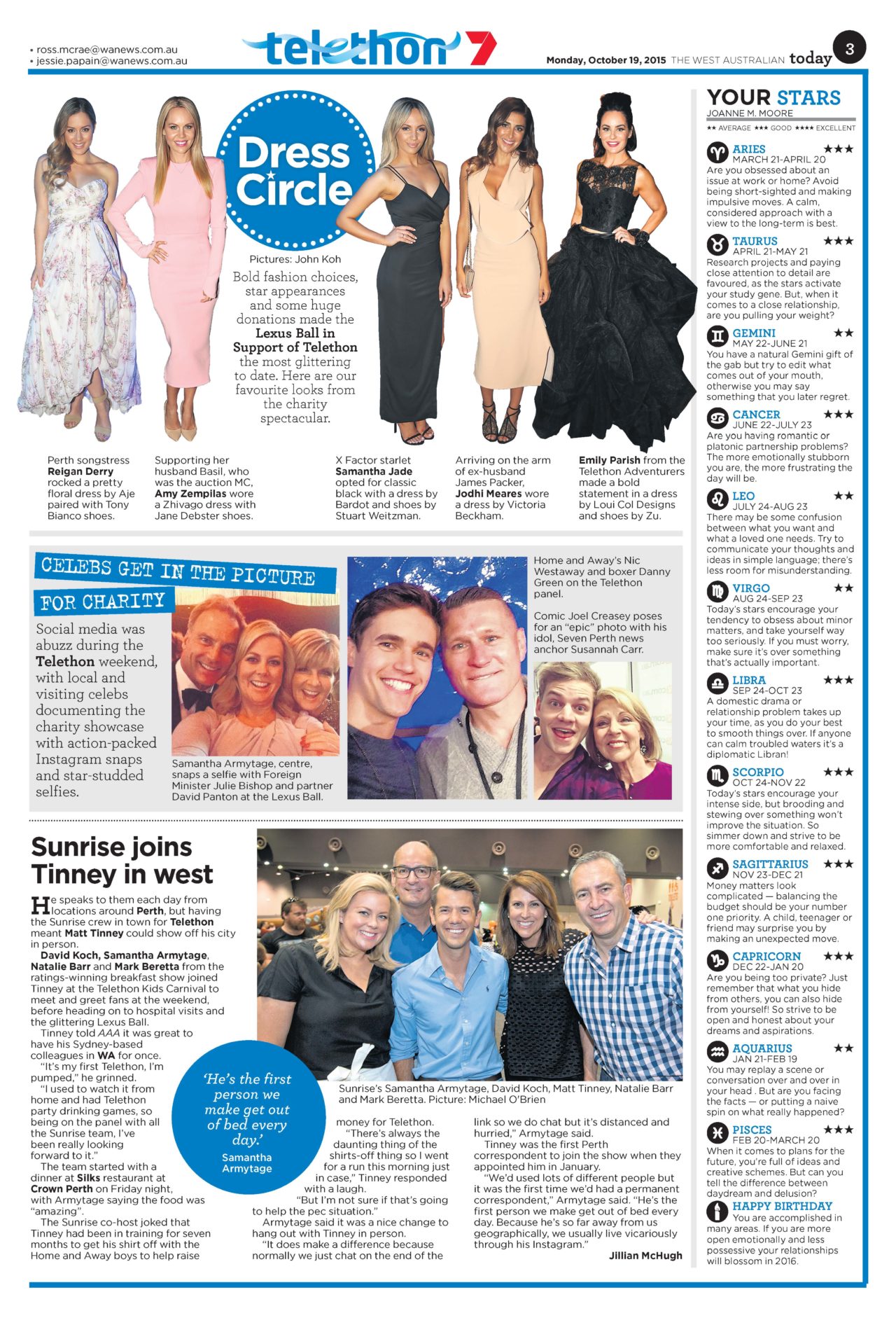 On Sunday, House Rules judge Wendy Moore and Better Home and Garden’s Adam Dovile joined Rick Ardon at the 2015 Catalina Telethon Home by In Vogue in Clarkson which sold at auction for $707,500.

Long-time supporters Crown Perth launched “Cash Cow Millions from Crown” where personalities participated in a series of exciting bucking challenges which raised an enormous $2.5 million. Crown has now donated over $10.6mllion to Telethon.

The Online Auction which ran throughout the weekend raised a staggering $92,000. A standout item was Nat Fyfe’s cane, famously used at this year’s Brownlow Medal count selling for $19,950. One lucky music lover also snapped up a Yamaha baby grand piano for $9,100.

Ex-rugby player, Matt Fuller and Soa “The Hulk” took to the ergo grinder for 24 hours with Peard Real Estate donating $40,000 and many other supporters donating online.
The Spud Shed’s Tony Galati arrived at the Perth Convention and Exhibition Centre on Sunday afternoon to support his good friend Soa “The Hulk” and generously handed over a cheque for $50,000.

Telethon CEO, Steve Mummery was thrilled again with the result from the weekend.
“It’s been a tough year out there for everyone in Western Australia, but it feels like every single person has dug as deep as they can to help make this Telethon the best one ever. Reaching another record of $25,854,524 is something that every West Australian should be incredibly proud of,” he said.

Social media again played a huge role in connecting celebrities with their fans across the Telethon weekend, with loads of talent taking to the Telethon Twitter, Facebook and Instagram feeds to interact live with people across Western Australia. This year #telethon7 was globally trending throughout the weekend, ending with over 105,000 followers across its social media channels and reaching millions around the world.

Local West Australians who appeared on our screens throughout the year, Brian and Karina Day from House Rules; Eva and Debra, Kat and Andre, Bianca and Drasko from My Kitchen Rules.

Also making their way to Perth to perform were Samatha Jade, Nathaniel, Reigan Derry, Taylor Henderson, Pseudo Echo, Dennis Locorriere ( the voice of Dr Hook), Rachel Beck and two of the Top 12 in this year’s The X Factor, Dan Hamill and Perth’s own Fisher Boys, and a special performance from Darryl Braithwaite, who wowed the audience at The Lexus Ball earlier on Saturday night.